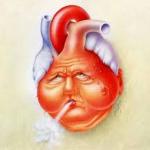 Unfortunately the first sign of a heart attack, is usually a heart attack, you get very little warning! Well, that’s what we have always thought, but in fact the good news is that research has uncovered a few symptoms that, on the surface, seem unrelated to the heart and are often considered insignificant by many people. However on closer examination they can be predictors of heart problems and should be taken seriously.

We often associate bleeding gums with not flossing enough, or more seriously, inflammation of the gums known as gingivitis. This is caused by a long term build up of plaque, a substance made up of food debris and bacteria and totally unrelated to the arterial plaque that is associated with heart disease. However if you have had a consistent problem with bleeding gums it is worth thinking about your heart health.

So why is your gum health related to your heart? Firstly, poor circulation often seen in patients with heart disease could contribute to bleeding gums and gingivitis. Get help from a good dental team to help fix such problems.

Secondly, research supports the idea that oral bacteria can spread into the blood stream and contribute to arterial plaque.

In one study of 657 people, researchers analysed 4,561 oral plaque samples (an average of seven samples per person) and assessed them for 11 different types of bacteria. They also conducted cardiovascular assessments and testing on the participants.

Eccella Smiles found that, overall, higher levels of periodontal bacteria were related to a greater thickness of the inner walls of the carotid artery. In addition, white blood cell values were higher in those who had more bacteria in their systems. They concluded that there is a ‘direct relationship between periodontal microbiology and subclinical atherosclerosis’. It is therefore important to floss your teeth every day and visit your dentist regularly to have your teeth cleaned. If you don’t know a good dentists then call and start your Durham Dental journey as soon as you can. Let them talk you through things, and soon you’ll just be visiting every so often for routine checkups and cleanings, keeping you safe.

Sometimes, our bodies retain water, which causes swelling, this is a condition known as oedema. It can happen for a variety of reasons, including allergic reactions, low levels of certain proteins in the body, injuries or infections, a blockage in the lymphatic system, pregnancy and the use of certain medications.

On a more serious level, oedema can also be an indicator of heart disease. When the heart weakens as a result of disease, it pumps blood less efficiently. This causes fluid to build up, especially in the legs and feet, because they are furthest from your heart, and it takes more work to pump the blood there.

Shortness of breath along with other symptoms could indicate that a heart attack is currently happening, but it could also be a sign of future heart problems, because a weak heart pumps less oxygen through the body resulting in shortness of breath.

Sleep apnoea is a disorder in which a person’s breathing is interrupted whilst sleeping. The interruption is most often caused by an airway blockage, usually where tissues at the back of the throat collapse. People with this condition stop breathing repeatedly throughout the night depriving the brain and the body of oxygen.

If left untreated sleep apnoea can lead to a variety of heart conditions such as high blood pressure and heart attack due to the fact that the reduced oxygen intake leads to less oxygen feeding the heart. Sleep apnoea also increases inflammation in the body, another risk factor for heart conditions.

According to a recent study, a certain group of men with sleep apnoea seem to be at higher risk for heart problems than women. Researchers followed 1,927 men and 2,495 women who were free of heart disease and heart failure at baseline. After almost nine years, they found that sleep apnoea was a significant predictor of heart disease (including heart attack and death) in men ages 40 to 70, but not in women or older men.

Difficulty maintaining an erection could be a huge wakeup call for many men, and I am not just talking about affecting your sex life. This is the No 1 indicator of artherosclerosis and heart disease and it can predict your risk 2-3 years before! Infact men who have erectile dysfunction (ED) have an 80% higher risk of heart disease.

In the early stages of artherosclerosis smaller arteries, like those to the penis, get blocked with plaque, before the larger arteries like those supplying the heart. This reduces the blood flow making it difficult to get an erection. So don’t put it down to stress or ageing or lack of energy, and it is certainly not ‘all in the mind’!

In a study published in January 2013, researchers followed 95,038 men, 10,159 of whom were treated for, or died of, cardiovascular disease. They found that the risks of cardiovascular disease and death increased steadily with the severity of erectile dysfunction. If the blood has difficulty getting to the groin, what about other places where it is needed like your heart and brain?

The most important substance involved in relaxing and expanding your blood vessels is Nitric Oxide (NO). When there is lots of NO, your blood vessels are wide open and blood flows easily. However research shows that the levels of NO that your body produces reduces with age, and lower levels of NO causes the blood vessels to constrict. It also damages the delicate walls of the arteries allowing plaque to build up, and this in turn narrows the vessels even more.

A good supplement to take is L-Arginine, this amino acid is absolutely necessary to keep your blood vessels and arteries open and functioning properly by increasing your NO levels. Another amino acid has also been found to increase NO levels and that is L-citruline, and can be found in foods such as watermelon, cucumber and other melons.

Other supplements that are good for the heart are fish oils, such as Eskimo 3, CoQ10 especially if you are taking statins because it depletes your levels of this very important substance, and B6,B12 and Folic Acid especially if your cholesterol levels are high.

So don’t ignore these small signs, get yourself checked out and keep your heart as healthy as you can by taking supplements to help. If you’re living with someone showing these signs, you can get the services of a Hospital at home company to monitor their condition and also in cases of emergency where they need to be transported to a hospital.