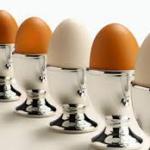 I remember in my teens (a long time ago now!) when I was still living with my parents, and my Father used go to work on an egg every morning! He would have an egg, sometimes two, for breakfast, often with bacon and sometimes with a sausage. Then we learnt that eggs were killing us and clogging up the arteries with cholesterol!

After that he had to change his breakfasts and instead of a high protein start to the day which kept him going until lunch time he started to have cereals, sometimes porridge but more often a bowl of high sugar cereal, that left his stomach growling with hunger long before lunch!

Now many years later, we find that eggs do not clog up the arteries and a large new meta-analysis finds eating an egg every day does not increase your risk of heart attack or your risk of stroke either! In fact the evidence shows just the opposite!

It turns out that the nutrients in eggs may actually be protective. The study found that eggs not only lower the risk of cardiovascular disease, they also raise good (HDL) cholesterol levels. People who had a higher egg consumption had a 25% lower risk of suffering a stroke.

This data was taken from 8 well documented studies following almost 475,000 people for between 8 and 22 years. The conclusion was that many people eating eggs for breakfast ate processed food with them, such as bacon, ham and sausage and it was the meats that were causing the problem!

We eat a lot of processed meats in this country, and it’s not just the bacon, ham and sausages, but salamis, luncheon meat and corned beef that are all bad for us. They are loaded with sodium, colourings, nitrates, corn syrup and other chemicals that do not do us any good, and it is showing in our health.

A new study discovered that eating processed meat can increase your risk of dying earlier.

This huge study was initiated in 1992 and is the largest research effort on diet and health ever undertaken. In fact, it involves almost a half million people in 10 countries.

This is what the researchers found:

People who ate more than 5.6 ounces of processed meat each day had an increased risk of dying of cardiovascular disease compared to those who ate less than about 0.7 of an ounce daily. They also had a higher risk of dying from cancer or other causes.

In the end, eating processed meat increased the risk of premature death by 44%.

I suggest that an egg for breakfast is a great way to start your day and you could have it with some fresh fish or tomatoes. Try a few green vegetables with it and you will find that you have much more energy during the day and your brain works much better. For lunch have fresh chicken or turkey that you have cooked yourself rather than the processed meats, and make sure you have lots of vegetables too.

After cereal and sandwiches, your blood sugar goes up and your body cries out for insulin, which then has to decide what to do with all the extra sugar that is not needed immediately, so it takes it to your fat cells and stores it as more fat. This brings down your sugar levels, which very quickly makes you crave for more to keep you going, and it becomes a vicious circle.

High glycaemic breakfasts and lunches can cause many more problems, ranging from blood sugar cravings causing you to eat more high glycaemic foods, to insulin resistance to obesity and eventually to type 2 diabetes. Always make sure that you have a little protein at each meal to keep your sugar levels and therefore your energy levels more even.

So don’t think badly of the egg, it is a good source of protein and full of protective nutrients.