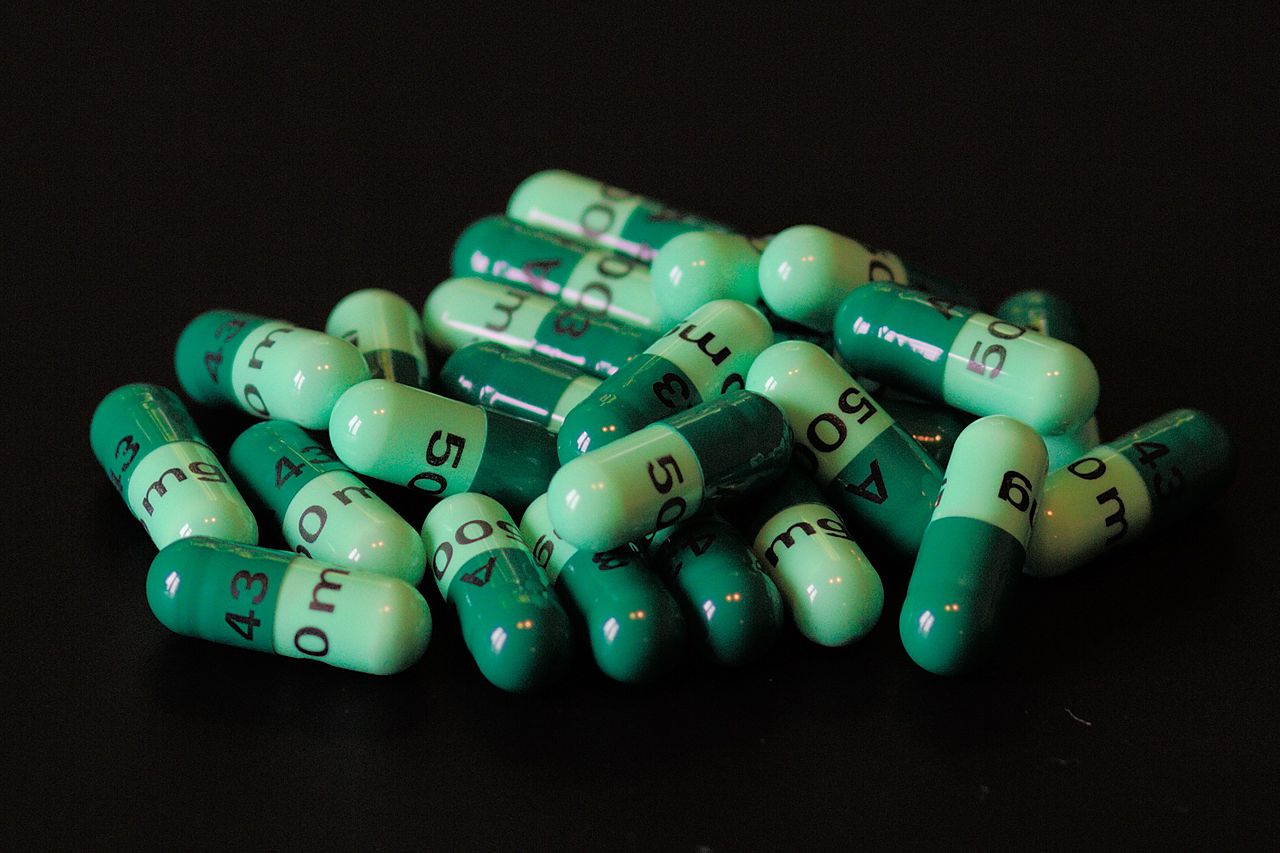 More and more we are hearing that our antibiotics are not working so well because the bugs are becoming resistant to them. Soon, even common infections will be able to kill us! This is a scary thought, but luckily there are simple, natural solutions for fighting outside threats to your body and they’re not like prescription drugs. These won’t kill the good bacteria as well.

Here are some natural alternatives to antibiotics….

Although it is a rich source of saturated fat, it is different from the saturated fats in steak and cheese because it is full of powerful medium chain triglycerides (MCTs), rather than the long-chain fatty acids, and these are metabolised differently in the liver. The most impressive of these MCTs is lauric acid because it has the ability to kill harmful bacteria like Helicobacter pylori which cause stomach ulcers. Research shows it’s also effective at fighting C. Difficile, which is a strain of antibiotic-resistant bacteria and one of the leading causes of diarrhoea in hospitals worldwide, and also Staphylococcus Aureus a very dangerous bacteria. When coconut oil is enzymatically digested, it forms a monoglyceride called monolaurin and this too kills harmful pathogens like bacteria, viruses and fungi.
Try eating a small spoonful of coconut oil every day with a meal, you can add it to a salad and it will support your immune system and keep bacteria at bay.

This helps to defend against a wide variety of viruses and bacteria and it can do things that most prescription drugs can’t, such as cutting off the amino acid supply to viruses which helps to stop them from spreading. One study found that exposing E. coli to just a 6% olive leaf extract completely destroyed it because it contains a bitter compound called oleuropein, which is thought to give the olive tree its disease resistance, and the primary ingredient in oleuropein is elenolic acid. This chemical inhibits the growth of viruses, bacteria, fungi and parasites. The benefits of olive leaf extract differ from pure immune boosters in that immune boosters stimulate your immune system to destroy disease which still requires your own energy. Olive leaf extract mainly does the work for you, which is important when you are run down and is the reason most people regain energy when taking it. Olive leaf can also be taken as a preventative, having it in your blood stream immediately dulls or obstructs an attack before your immune system even has time to react.

Some call it the ‘king of bitters’, and it is also known as ‘Indian Echinacea’. Indian folk medicine has used this bitter herb for hundreds of years to treat digestive problems and it’s even an antidote to scorpion venom. The active ingredient in andrographis is andrographolides and it helps fight influenza and upper-respiratory infections. Scientists have discovered that andrographis helps to boost the immune system by stimulating the body’s production of antibodies and macrophages, which are large white blood cells that scavenge harmful microorganisms. Its potent antibacterial properties provide protection against most pathogens and it is taken for both the prevention and treatment of the common cold. Andrographis kills harmful germs and it also helps to reduce your symptoms and leave good germs unharmed.

Natural healers have used the bark of this South American tree to treat fever and inflammation since 1873. Scientists have identified two active chemicals in Pau D’Arco, these natural chemicals are called naphthoquinones: lapachol and beta-lapachone, and they have antiviral and antibacterial properties. They activate various immune cells in the human body, the lymphocytes and the granulocytes and even drug-resistant infections can’t stand up to them. It is important that any supplement comes from the inner bark, because in its isolated form lapachol is quite aggressive, but nature has brought together a combination of healing substances in the inner bark that act in a synergistic manner to activate the immune system.

It’s one of the best foods you can keep on hand, not only because of the flavour it adds to your meals but also because garlic kills bacteria and fights disease. Russian soldiers used it as a natural antibiotic during World War II after running out of penicillin. Did you know that you can increase the health benefits you receive from garlic by letting it sit after you’ve chopped it or crushed it.If you give your chopped/crushed garlic time to sit before changing its temperature, through cooking, or its pH, through the addition of acidic food like lemon juice, it will give the alliinase enzymes in garlic an opportunity to work on behalf of your health. Garlic is rich in a variety of powerful sulfur-containing compounds including thiosulfinates, of which the best known compound is allicin, sulfoxides, among which the best known compound is alliin, and dithiins, in which the most researched compound is ajoene. While these compounds are responsible for garlic’s characteristically pungent odor, they are also the source of many of its health-promoting effects. Recent research found that it may even help protect against the common cold, and has also shown the ability of crushed fresh garlic to help prevent infection by the bacterium Pseudomonas aeruginosa in burn patients, but that’s just the tip of the iceberg. Allicin can fight the ‘superbugs’ that prescription drugs can’t including VRE and MRSA.

Silver is a metallic element that has antibiotic properties and hydrosol silver, also known as colloidal silver, is silver particles suspended in a liquid. In Roman times they used to put silver coins in their water pouches to kill the bacteria and keep their water clean, and in the early 20th century physicians used colloidal silver as an antibiotic to kill off infections but its use was largely discontinued in the 1940s following the development of the modern antibiotics.
Silver is known for its microbial properties and has been found to kill bacterial cells and other microbes including viruses and parasites. When used topically it can prevent infections in open wounds, and it has also been found to minimise the incidence of infections in patients using urinary catheters and breathing tubes. Owing to its ability to inhibit the replication and the spread of bacteria and fungi it is considered to be a strong immune booster. It does this by acting as a catalyst and disabling an enzyme that facilitates actions inside cells. It is not consumed in the process so it is available to keep working again and again. The enzyme silver destroys is required by anaerobic, unfriendly bacteria, viruses, and moulds. In lab tests Hydrosol Silver has been found to be able to kill even antibiotic-resistant bacteria.

I have always said that if you have a cold or flu, high doses of Vitamin C and some zinc can be very effective. It is a potent antioxidant and unfortunately we do not take enough of it. Most mammals make their own Vitamin C in high quantities, as much as 8 grams a day, but some, including humans, have lost that ability over evolution and so have to take it as a supplement! The ‘recommended daily allowance’ is 75-90mg but this is only enough to prevent vitamin-deficiency diseases such as scurvy, and not nearly enough to support optimal health and fight infections.
The Nobel prize-winning scientist, Dr Linus Pauling was one of the first to recognise the importance of high dose Vitamin C supplementation, 30 years ago, and he advocated that you took an increased dose every day until you developed diarrhoea, and then dropped it down a dose continuing with that amount daily!
There have been studies to show that Vitamin C not only speeds recovery from infections but also helps to prevent their onset, because it acts as a strong antioxidant. This has been shown in children with upper respiratory tract infections, in the elderly with pneumonia and bronchitis, and in people with chronic infections of the stomach with the dangerous breed of bacteria known as helicobacter pylori. In these conditions this bacteria can contribute to ulcers, gastritis and even cancer but high doses of Vitamin C reduced that risk by 90%.

So I am suggesting that you forget the antibiotics. You don’t need to rely on a prescriptions. These natural tools will help you defend against bacterial and viral infections. These solutions will also support your immune system and keep the good bugs alive. They may even save your life if you ever face a “superbug.”