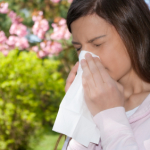 If you are now spending more time outside, hayfever could be a problem.  Hayfever, also known as seasonal allergic rhinitis, is a very common condition that affects at least 20% of people in the UK. It is caused by an allergy to airborne substances such as grass, tree, rape or weed and shrub pollens, which affects the upper respiratory passages (nose, sinus, throat and eyes).  From May to July grass and flowers are in pollen, making these the most common cause of hayfever.

Hayfever symptoms can be similar to a cold, and include a runny nose, watery eyes and repeated sneezing attacks. As with all allergies, the symptoms happen as a result of your immune system (the body’s defence system) overreacting to a normally harmless substance, in this case, pollen.  When the body comes into contact with pollen, cells in the lining of your nose, mouth and eyes release a chemical called Histamine, that triggers the symptoms of an allergic reaction.

You are more likely to get hayfever if there is a history of allergies in your family, particularly asthma or eczema. Hayfever usually begins in the early teens and peaks when you’re in your twenties. Research shows that many people become less sensitive to pollen as they get older, and by the time they reach their mid-forties, hayfever may no longer be a problem.

Hayfever symptoms vary in severity and you may find that your symptoms are worse some years than others, depending on the weather conditions and pollen count. Your symptoms may also start at different times of year depending on which type of pollen you are allergic to.

In general, the symptoms of hayfever are:

So what can you do to treat your hayfever? In my opinion, it is just like any other allergy, and I would test for food sensitivities first. It is the immune system that is overloaded and the more you can unload your immune system the easier it will find it, to cope with the other sensitivities.
I use the Vega test to find out what your sensitivities are. Vega testing, works on the premise that the body is made up of energy, and this type of treatment is referred to as bio-energetic medicine. Although conventional medicine struggles with the concept of biological energy, all other ancient healing cultures (for example, Chinese and Indian) believe in some form of vital force or energy.

Vega testing can test a whole range of foods and airborne substances and having discovered the foods that you are sensitive to I recommend that you remove those foods completely from your diet for a period of time, at least 6 weeks. At first you may suffer some withdrawal symptoms, including headaches, joint and muscle pains, fatigue and generally a lack of energy. However these soon fade and you will start to feel better and invariably your hayfever lessens.

The other things that I give to help with hayfever are desensitising drops to the airborne allergens. These are very small amounts of the pollen in a homeopathic potency that stops your body reacting to it.

There are also supplements that can help with your hayfever symptoms such as Aller-C, a combination of nutrients that are used to support the immune system and a healthy inflammatory response. It contains Quercetin which supports healthy histamine levels and is a potent antioxidant.

SerraEzyme is an anti-inflammatory so if you are suffering asthma type symptoms they can help to relieve your symptoms.