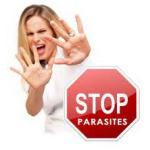 Diet, exercise and lifestyle are the things we tend to think of when trying to lose weight, but there is another cause which is often overlooked – that is parasites!

Parasites are bacteria, viruses, fungi, bugs and worms, and they cause a multitude of problems. By definition, they live off other living things. They need a host in order to survive and reproduce. Those that infest our bodies do not have a digestive system of their own and so rely on the digested food and the nutrients that we eat, and they also actually live off our tissues stealing our energy and making us feel weak.

These parasites are not only in areas where there is no access to clean drinking water or adequate medical care, they are also found in England and America. According to the US Centres for Disease Control and Prevention (CDC) nearly 100 million Americans are infected with internal parasites and I am sure that we are no different in this country! In England there are many people with an overgrowth of fungi which occur after antibiotics and other drugs, and others with bacteria such as helicobacter pylori and campylobacter which create inflammation and ulcers in the gut. These are all parasites.

How are parasites making you fat?

Well, they create inflammation, which inhibits the efficient absorption of nutrients. They take all the good stuff from the food you eat, leaving you craving more food and in the end causing malnourishment. The parasites digest the nutrients from the food that that they take and excrete waste, flooding your body with toxins. These toxins and excess acid build up, accumulates in your liver and kidneys, and then it is dumped into your fat cells for storage as the liver struggles to cope with them all.

The toxicity and the inflammation cause high acidity which breaks down your muscle tissue, and then your metabolism slows down to remove excess acid from your blood stream.

Parasites disrupt the flora in your gut, by slowing down the production of good bacteria and stimulating the growth of bad bacteria, this will compromise your immune system and cause even more problems!

There is a hormone that regulates our hunger response, appetite, metabolism and energy levels called leptin, and in a study done by Wayne State University, scientists discovered that the human adenovirus was found to cause obesity in test animals by inhibiting leptin production causing fat cells to accumulate and increasing insulin sensitivity.

At the Pennington Biomedical Research Centre, Dr Nikhil V Dhurandhar says that seven viruses have been reported to be the cause of obesity in animal models by various research groups.

So how do we get parasites?

• Infected food and water especially undercooked pork and beef
• Food poisoning
• Transmission of bugs from unwashed hands onto food or into your body through your mouth and nose.
• Rodents, cats and dogs may be carrying undetected parasites
• Taking antibiotics, steroids and hormone replacement drugs compromises the immune system and makes us more susceptible to viruses and fungi
• Intimate contact with others


Problems that are linked to parasite infections are:

The vega machine can test for parasites including viruses, fungi and bacteria and then it is really important to get rid of them with some good supplements. After that it is vital to clear the liver of the toxins produced by the parasites, to put some good bacteria back into the gut, line the gut wall so that there is better absorption across it and put back the nutrients that the parasites may have taken so that you build your immune system again and prevent further infection.

Supplements that may help

Could this be a reason for your difficulty in losing weight?