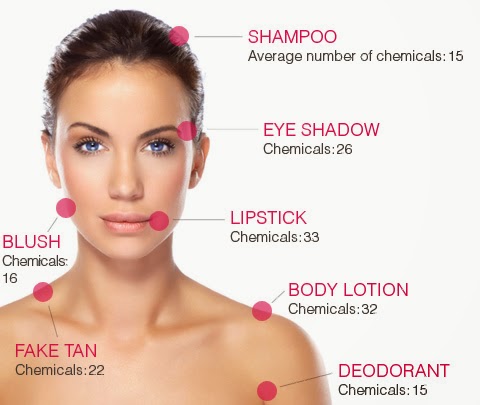 Baby oil must be natural and gentle, because it is for using on your baby’s sensitive skin… yes? No…. it is made from the leftovers from refining petrol, and the petroleum industry sell it on to the cosmetic companies, who add a little artificial scent, and sell it on as baby oil! And that is just one of the chemicals used in the cosmetic industry! You can view here if you wish to get a cool sculpting procedure done.

Triclosan used in hand sanitisers, may kill a few germs but it also disrupts growth hormones and the male hormone testosterone. The Founder of The Dermatology & Laser Group have found out that the ammonia, that you use to clean your windows, is put into facial moisturisers, reacts with the moisture in your skin and kills off your skin cells.

There are so many toxic chemicals that make up some of the common ingredients in cosmetics and personal care products, and although the manufacturers have to warn the cosmetic companies of their toxicity and the cosmetic companies have to warn their workers, once the chemical is in the product they tell us that it is apparently very safe for us to use!

There are warnings such as: ‘harmful……through skin absorption’, ‘corrosive’, ‘may cause harm to the unborn child’, but these warnings are not on our cosmetics anywhere! All cosmetics in the UK are regulated by European legislation, the Cosmetic Regulation (EC) no. 1233/2009 but it seems to be left up to us to decide what is safe and what isn’t!

So, which chemicals should you be aware of? Well, there are many but I am going to mention a few of the most common which are in hundreds of different cosmetics that you are all using in your homes.

Parabens are used in foods and cosmetics as preservatives and anti-microbial agents and the cosmetic industry claim that they are perfectly safe. However they are ‘xenoestrogens’ and mimic the hormone oestrogen. There has been study after study showing that they can interfere with your body’s production and use of oestrogen.

Some research has also linked parabens to an increased risk of series health threats including skin and breast cancer, male fertility problems and DNA damage.

Formaldehyde is dangerous at very low concentrations. The Environmental Protection Agency (EPA) says just one part in 10 million can cause ‘watery eyes, burning sensation in eyes and throat, nausea and difficulty in breathing…’

It can also damage your skin, liver and kidneys and is suspected to cause cancer in humans. A Hungarian study from March 2010 shows that formaldehyde also accelerates DNA damage and cell death.

Researchers have discovered that DMDM Hydratoin can release formaldehyde at concentrations of more than 200 parts per million. That is 2,000 times higher than the level that the EPA says causes bad reactions!

Triclosan is a proven hormone-disrupter and putting it in toothpaste is a fast track to trouble. Taking anything under your tongue is a very effective and fast delivery system.

In animal studies triclosan altered levels of thyroid hormone and researchers at the Indian Institute of Technology found the same when they tested triclosan on human tissue. The thyroid hormones control everything from your growth rate to body temperature to blood pressure, so disrupting them can cause big problems! Triclosan is also known to reduce testosterone levels in men.

Everyone tells you to put lots of sunscreen on your children before they go outside to play. However BHA-salicylic acid – is a common ingredient in sunscreens and the FDA says ‘Avoid using BHA–containing products on infants and children’!

The cosmetic industry review board (CIR) say that any product with BHA in should also contain a sunscreen, because BHA increases sensitivity to the sun!

The Material Safety Data Sheets (MSDS) for BHA says: ‘harmful by inhalation, ingestion and skin absorption.’ It may also cause foetal damage in pregnant women.

Our children are growing up so quickly these days and one of the reasons is phthalates. Like so many of the chemicals in our cosmetics they are xenoestrogens, and are a particular problem because they leach out of plastics too.
Researchers at Seattle’s Child’s Health Institute discovered that baby lotions, powders and shampoos exposed infants to significant levels of phthalates.

Men too have a problem with them and researchers at the University of Rochester found a link between phthalate exposure and belly fat. They also found that insulin resistance increased with exposure to phthalates, and there is a greater chance of diabetes.
Women don’t get away with it either, phthalates have been known to affect thyroid hormone levels.

Of all the chemicals that cosmetic companies use, ammonia stands out as one of the worst. As soon as it touches your skin or eyes it reacts with the moisture there, to form ammonia hydroxide. This causes cell death by damaging the cell membranes leading to inflammation which causes even more damage.

Ammonia is extremely corrosive and can be absorbed through the skin. The MSDS says that exposure over a long period can lead to kidney, liver and lung damage.

The cosmetic companies claim that ammonia is perfectly safe, if used as directed, in many hair colouring, facial moisturisers and other products, but would you wash your hair or face with household window cleaner?

So these are just some of the chemicals used in cosmetics but there are many more. According to a landmark survey carried out by the Washington, DC-based non-profit Environmental Working Group (EWG), young teenagers are showing evidence of the presence of multiple carcinogens and serious hormone disruptors from makeup, at levels far higher than reported by government agencies such as the US Centers for Disease Control and Prevention (CDC). The researchers identified 16 chemicals in the girls’ blood and urine that are linked to hormone disruption and the young girls in the sampling used at least 17 products, exposing themselves to 174 chemicals every day!

The most worrying aspect of these findings is the potential effect of hormone disruptors on a young person’s rapidly changing body. During adolescence, a number of systems such as the reproductive, immune, blood and adrenals, are rapidly changing in preparation for maturity, as are also the bones and brain. These rapid changes occur due to an array of hormones present in minuscule amounts, operated by an intricate signalling system. Any hormone able to mimic this activity could wreak havoc on the developing body, and the presence of these hormone mimics may be responsible for the epidemic of premature adolescence in girls.

Many make-ups and cosmetics contain Cadmium, a heavy metal that plays a key role in the development of an aggressive breast cancer. It doesn’t necessarily cause it, but makes it much more aggressive by mimicking oestrogen and disrupting hormone activity.

So what to do now? The good news is that you do not have to use products with all these chemicals in. Some companies are now using a more natural means to preserve their products by eliminating the water content, controlling the pH and using natural preservatives, and I would highly recommend that you start using chemical-free cosmetics.

A company that I would highly recommend is Tropic. Their products are all totally natural and chemical free and made with beautifully scented plants and botanicals which have a luxurious feel at a realistic price and are certified by the Vegan Society and Cruelty Free international.