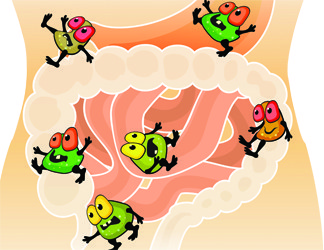 We are now in the middle of winter but we have not had much cold weather to kill off all the bugs, so it is really important to boost your immune system to help prevent any colds and infections.

One really good way of doing this is by taking a probiotic because 60-70% of your immune system is located in your gut. This defence network consists of lymph tissue referred to as GALT (gut-associated lymphatic tissue). The probiotics in your gut are constantly interacting with the GALT and essentially priming your immune system for contact with other potentially harmful bacteria.

When the large intestine has a healthy population of good bacteria, the bad bacteria are crowded out preventing them from causing major infections.

Supplementing with probiotics activates several components of your immune system including the infection-fighting antibodies, the proteins that identify and neutralize harmful antigens.

Specialists investigated the topic using the help of a clinical research organization. Their findings were then published in the British Journal of Nutrition. What this research has revealed is that daily supplementation with the beneficial bacterial strains Bifidobacterium animalis ssp. lactis (BB-12) or Lactobacillus paracasei ssp. paracasei (L. Casei 431) can boost immune function by an incredible 50 per cent.

Results were based on a randomised, double-blind, placebo-controlled, parallel-group study involving 211 subjects and the use of an immune challenge. The researchers randomly assigned the study participants to receive daily supplements of BB-12 or L.casei 431 (a minimum of one billion colony-forming units) or a placebo for six weeks.

After two weeks of supplementation with the probiotics, the participants received a seasonal flu vaccine. Four weeks later, the researchers recorded substantial increases in flu antibodies in the probiotic groups, compared with the placebo group. The researchers also noted similar results for total antibody concentrations.

This backs up previous research findings on the immune-boosting benefits of probiotics. Canadian researchers from the Department of Pathobiology, Ontario Veterinary College, University of Guelph, revealed that probiotics increase the amount of ‘friendly bacteria’ in the gut and this stimulates your body to produce natural antibodies.

The researchers found that these antibodies are particularly active against infections such as tetanus following surgery.  Probiotics may even play an important role in the fight against superbugs. A randomised controlled study found that a yoghurt containing three probiotics cut down the amount of diarrhoea patients suffered as a result of being put on antibiotics to treat the bug C. difficile, which they had picked up in hospital.

So as part of your immune boosting programme don’t forget the probiotics!