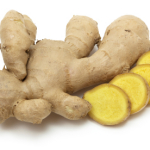 Ginger is the rhizome (root) of the plant Zingiber officinale and is consumed as a medicine, a spice and as a delicacy. Other members of the same family are cardamom, galangal and turmeric.

Young ginger roots are juicy and fleshy with a very mild taste and used in many dishes or steeped in boiling water to make ginger tea. Mature ginger roots are fibrous and nearly dry. The juice from old ginger roots is extremely potent and is often used as a spice in many Asian dishes.

Ginger is used in recipes all over the world including Western cuisine, Indian, Chinese, Japanese, the Caribbean, Corfu and the Middle East. It can be used in desserts, savoury dishes and even in some drinks.

From a medical point of view ginger has been used to decrease the pain of arthritis, it may also have blood thinning and cholesterol lowering properties and therefore could help in heart disease. Some preliminary research has found that it may be helpful in anxiety because certain compounds in ginger bind to human serotonin receptors. It is active against a certain type of diarrhoea and has been found to be affective in treating nausea caused by motion sickness, morning sickness and the effects of chemotherapy. Ginger has also been helpful in indigestion, slow motility, constipation and colic.

Ginger’s anti inflammatory effect has been shown in an exciting new study, published in the journal Cancer Prevention Research. It has found that ginger may help to reduce colon inflammation, and therefore the associated risks of developing colorectal cancer.

In the study, the researchers found that people who took ginger supplements had a significant 28% decrease in inflammation of the colon, which is known to be an important precursor of colon cancer, compared to placebo.

The research team recruited 30 volunteers to take either a daily supplement of 2g ground ginger root extract, or a placebo for 28 days.

They measured markers known to increase intestinal inflammation levels both before and after the 28 day period. Results showed that the inflammation had significantly reduced.

2gs of root ginger is a lot more than is in a normal diet so a supplement is recommended to get the full benefits as a treatment. Ginger oil has also been shown to prevent skin cancer in mice, and a study at the University of Michigan demonstrated that it can kill ovarian cancer.

A product that has ginger, rosemary and turmeric in, is UltraInflamX, a metabolic food that has great results against inflammation.