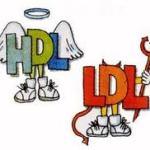 We are constantly being told by the medical profession that we must lower our cholesterol levels, especially the low density lipoprotein (LDL) cholesterol, also known as ‘bad cholesterol’, to avoid heart attacks. It seems to be that ‘the lower, the better’, although this has never been tested and more recently there has been increasing interest in the idea that the build-up of plaque on the inside of the arteries is promoted by the process known as inflammation, not cholesterol. Some scientists have suggested that inflammation is the key underlying process in the development of heart disease.

Recently there has been a study showing that cholesterol levels are probably not the best indicator for heart disease! In the study they took blood samples from 100 people who had had heart attacks, and 100 who had no heart problems, and they tested the blood for cholesterol levels and inflammatory markers. The results showed that there was no significant difference in the cholesterol levels in each group, in fact they were almost identical, but there was a significant difference in the inflammatory markers. Those who had had heart attacks had inflammatory levels 6 times higher, on average, than those who had not! This shows that inflammation is the major indicator that drives heart disease.

So why is it that the medical profession want to give everyone over the age of 55 statins and a blood pressure drug, whether you need it or not! Their argument being, that everyone would benefit, however they obviously haven’t taken into account any side effects. A study recently conducted at Nottingham University, revealed that the side effects from statin drugs are far worse than previously thought. The researchers found that statin users are much more likely to suffer liver dysfunction, acute kidney failure, cataracts and a kind of muscle damage known as myopathy. For some patients, the risk is eight times higher than for people not taking statins. Overall, the risk of myopathy, which may be irreversible, is six times higher for men on statins and three times higher for women.

Cholesterol is actually good for you! Without it you would be weak, slow, frail and impotent! Cholesterol allows you to live longer with a better quality of life. You need it to make vitamin D, to make the membrane of your cells and brain and to make sex steroids.

In a study from the medical journal, The Lancet, researchers looked at 724 people and followed them for 10 years. They found that higher cholesterol levels meant a lower chance of dying from any cause! So why are they still recommending statins? Don’t be persuaded to take the drugs to lower your cholesterol. Rather take a supplement, Omega 3 fatty acids, and eat a diet, that will help to increase the ‘good cholesterol’. A low glycaemic diet staying away from carbohydrates that come from grains, refined sugars and processed foods, avoiding trans-fats and high fructose corn syrup and eating lots of fresh green organic vegetables will be much more beneficial.