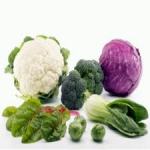 Researchers, led by Dr Xiao Ou Shu at Vanderbilt University in Nashville, Tennessee, have found that women who had survived breast cancer and who ate lots of cruciferous vegetables (broccoli, spinach and cabbage) within the first 36 months following their diagnosis, had a higher survival rate.

Results showed that increased intake of cruciferous vegetables was associated with reduced risk of dying of breast cancer, a decreased risk of mortality overall, and lower cancer recurrence in a dose-response pattern.

This data was from a Shanghai Breast Cancer Survival Study which monitored 4,886 Chinese breast cancer survivors for 4 years from 2002-2006.

Cruciferous vegetables contain bioactive compounds that have anti-cancer properties that may influence cancer development, progression and survival. They have been shown to reduce tumour proliferation in human breast cancer cells.

So, the message is clear and simple, to all women, eat plenty of cruciferous vegetables.