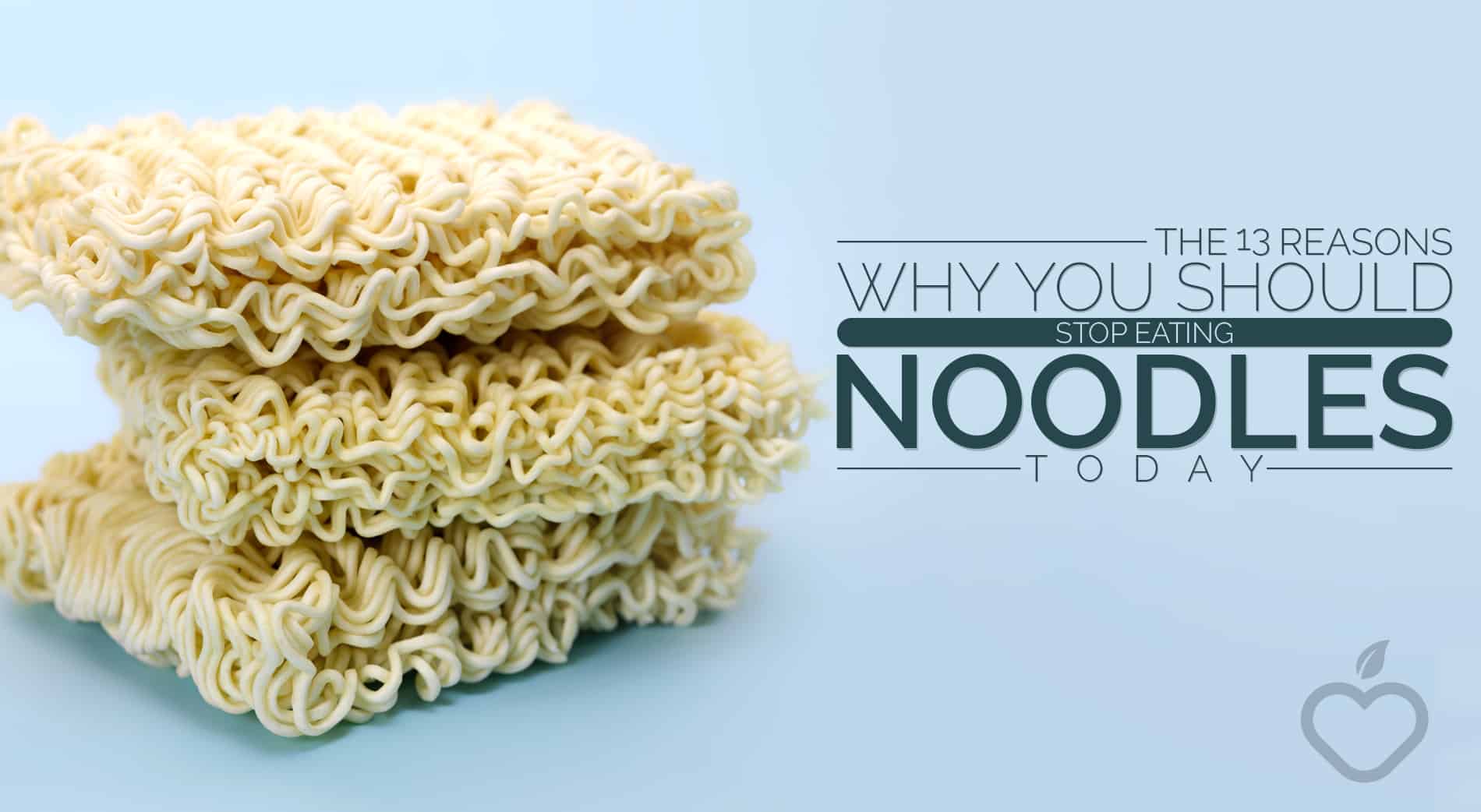 BY KAREN REED OF positivehealthwellness.com 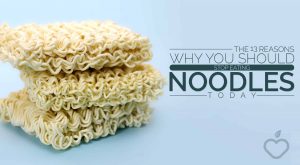 Everyone knows what noodles are. They are the long and thin strips which are easy versatile and easy to cook. There are different types of noodles out there, but not all of them are healthy. In this article, we’ll focus on instant noodles, a type of fast food which doesn’t need much time or effort to prepare. All one must do is unwrap the noodles, place them in hot water then add the seasonings once they’ve cooked.

Sure, cooking instant noodles is easy, but that doesn’t mean that people should consume them frequently. If a person eats a package of instant noodles occasionally, that’s fine. But always substituting healthy meals (which take a lot more time and effort to prepare) for instant noodles isn’t advisable. People who do this may have a higher risk of developing health problems over time.

Instant noodles are processed foods which people should avoid as much as possible. This is because indulging in them too much will surely make one sick. Still not convinces? Well, here are the 13 reasons why people should stop eating instant noodles today: 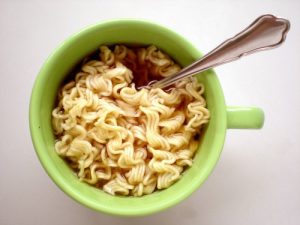 Sure, instant noodles taste great. In fact, they come in different flavors, so people can choose which one to cook then eat. But constantly consuming instant noodles would lead to a nutrient deficiency in the body. This is because these types of noodles don’t really contain any of the essential nutrients. When a person doesn’t get the right number of vitamins and minerals in the body, he might start experiencing some negative side effects. These include fatigue, dizziness, restlessness, and more.

The body needs vitamins, minerals, and nutrients to function properly. Without these, the person would have a higher risk of becoming weak and developing different illnesses. Instant noodles either have very minimal contents of these nutrients or none.

According to studies, women who consumed instant noodles frequently had an increased risk of developing metabolic syndrome. This refers to a set of conditions which include abnormal cholesterol levels, excess abdominal fats, and high levels of blood sugar, and blood pressure.

This is mainly because of the chemical content of the convenient treats. These chemicals have the tendency to mess with the hormones of females. Women who develop MS may be more susceptible to other diseases. These include chronic ailments, heart-related diseases, diabetes, and more. So, for women it’s better to consume “real food” which is healthier rather than instant noodles which are just easier to prepare.

Instant Noodles May Cause Rectal Cancer 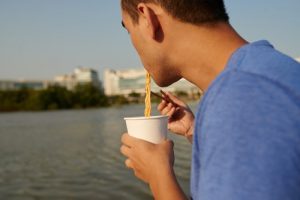 When a person consumes instant noodles, it takes a long time for the digestive system to process. This means that the noodles remain in the stomach for a longer time. This may lead to constipation. Then when the noodles are converted into feces, they still stay in the colon for a longer time. And this may indirectly be the cause of rectal cancer.

Instant Noodles May Cause Digestive Problems

Speaking of the digestive system, these noodles may also cause digestive problems. According to studies, instant noodles take a long time to digest. When the researchers inserted a camera into the participants, they found out that after more than 2 hours, the noodles haven’t broken down yet! They were still very much distinguishable inside the digestive tract. Because of this, the digestive tract must work harder to the point of convulsing just to process the instant noodles. 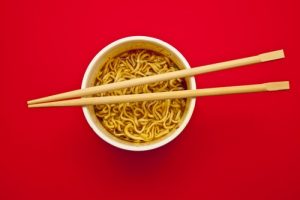 Here’s another reason not to eat too much of these noodles. Instant noodles typically contain a lot of sodium. Because of this, it may have negative effects on the body, especially for those who have a sensitivity to salt. When people consume instant noodles frequently, it may lead to an increase in their blood pressure. This, in turn, may lead to more serious health issues.

Instant noodles contain a lot of fats and other preservatives. All these components slow down the process of oxidation. This, in turn, would have an adverse effect on a person’s endocrine system. And this would result in a hastening of the aging process. So those who don’t want to look older than they are should abstain from eating these convenient products too much. 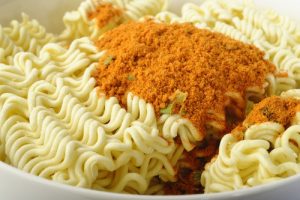 A lot of people know that instant noodles contain a lot of MSG. Monosodium glutamate or MSG is one of the most harmful ingredients out there. However, manufacturers use it often to enhance the flavors of their food products. MSG is a type of neurotoxin and to some people, it has the potential to be extremely addictive. MSG is a common ingredient in instant noodles as well as other types of processed foods. Some manufacturers even try to conceal the presence of the ingredient by using different names for it.

According to studies, the body makes use of an amino acid called glutamate as a transmitter of nerve impulses in the brain. Also, there are tissues in the body which are glutamate-responsive. But when the body gets introduced to MSG, it may cause abnormal functions of the glutamate receptors. And this has been associated with specific neurological disorders. So, consuming too much MSG may cause a lot of damage to the body and all its systems.

May Lead to Being Overweight

One of the main causes of obesity and being overweight is consuming noodles (at least, too many noodles). Noodles, particularly the instant variety, contains a lot of sodium and fats. These components cause the body to retain water. This leads to obesity, being overweight, and other dangerous conditions.

Instant Noodles May Cause Delayed Development in Children 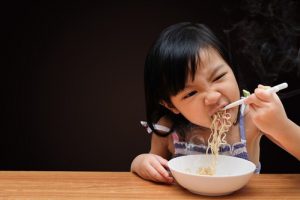 Instant noodles may also be harmful to children. When a child consumes these noodles regularly, it may cause delayed development. This is because the ingredients in the processed food product may disrupt their body’s natural ability to absorb nutrients. Since they don’t contain the essential nutrients, it may cause an interruption on the mental or physical progress of children.

One common ingredient in instant noodles is “propylene glycol.” This ingredient is quite harmful because it has an anti-freeze characteristic. Manufacturers use this ingredient because it retains moisture to prevent the noodles from drying out. However, it can weaken the body’s immune system. Propylene glycol gets absorbed easily, and it builds up in the heart, liver, and kidneys. Over time, it can cause damages and abnormalities to those major organs.

Aside from MSG and propylene glycol, instant noodles also contain other chemicals. In fact, when a person reads the ingredients of an average pack of noodles, he might not understand half of what it says. Consuming too many noodles may lead to different illnesses because of the effects these chemicals will have on the body.

Contains Too Much Sodium

These processed foods also contain a lot of sodium. Maybe therefore the noodles taste so good? The FDA recommends that a person should not consume more than 2,300 mg of salt each day. Unfortunately, an average pack of instant noodles would typically contain more than half of the recommended daily intake of sodium.

This means that the person would have already consumed more than half of the sodium he needs in just one meal. And in some cases, some people even eat 2 packs of these noodles a day! Consuming too much sodium may lead to hypertension, kidney damage, heart disease, and more.

Instant Noodles May be Harmful to Pregnant Women 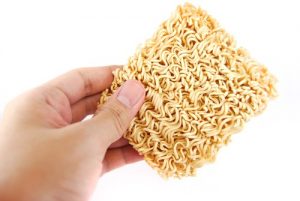 Finally, instant noodles may also be harmful to pregnant women. This is especially true in the early stages of pregnancy when the fetus is just developing. According to studies, frequently eating instant noodles might inhibit the development of the baby and might even lead to a miscarriage. Although more research is needed to support this fact, this type of processed food still isn’t recommended for pregnant women especially since they lack the essential nutrients.

What Happens to the Body When a Person Consumes Instant Noodles? 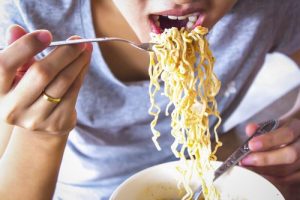 A lot of people enjoy instant noodles. Partly because there are different varieties to choose from and partly because they’re extremely easy to prepare. Instant noodles are a very popular choice for lunch or dinner especially for busy people who don’t have the time to prepare a home-cooked meal. Of course, most people don’t consider this as a healthy food. And most people don’t think that this convenient food option is bad for the body. To most, eating instant noodles is just like eating a burger from a fast food joint.

But has anyone ever wondered what happens to the body when a person consumes instant noodles? There was an experiment conducted wherein they used a pill-sized camera to see inside the body after a person eats a pack of instant noodles. Through the camera, they were able to see what went on in the stomach as well as in the digestive tract.

Apparently, instant noodles don’t break down easily, not even after a few hours of digestion. Even after about 2 hours, the noodles remain intact and very much recognizable. That is as compared to homemade noodles which get digested more easily.

This means that the processed noodles can have a negative effect on the digestive system. Consuming the noodles would force the digestive system to work harder and for a longer time, which causes strain on it. When food stays in the digestive tract for a long time, it will also affect the body’s ability to absorb nutrients. Unfortunately, instant noodles don’t really contain any healthy nutrients. Instead, they contain a lot of harmful chemicals which the body will end up absorbing.

What Should You Eat Instead? 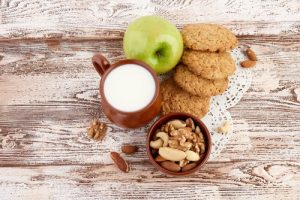 Instant noodles are popular all over the world. They’re convenient, delicious, and can be enjoyed as a meal or as a filling snack. However, we now know that these seemingly harmless products are, in fact, quite harmful to the health. This is especially true for people who consume a lot of instant noodles or those who eat them too often.

Instant noodles are a type of processed food which contains a lot of chemicals and unhealthy ingredients. Because of this, they’re considered as one of the “junk foods.” So, what should people do now? Well, it’s probably okay to consume instant noodles occasionally. But to satisfy the cravings, one needs to learn about healthier alternatives to the convenient noodles. Consider consuming these foods instead:

These types of noodles would give one the same kind of satisfaction as eating instant noodles. But they’re good for the health and are easier on the digestive system too.

One can make different kinds of cutlets at home. They’re filling, delicious, and can be prepared in advance then stored in the refrigerator for easy preparation when the craving strikes.

This is a great mood booster, and it’s beneficial to the body too. And who doesn’t love chocolate?

One can snack on dried figs, raisins, or other fruit varieties. They are nutritious, and they will make one feel full for a longer time.

These are available everywhere, and they contain proteins and vitamins. Peanuts can also help fight-off malnutrition because of their health benefits.

If the person makes the potato chips at home, he would ensure that they’re healthy. Because going for the processed chips would be like consuming instant noodles anyway.

These are convenient because one can carry them wherever they go. And when they have a craving, they take out the chickpeas and start munching!

These are made from a finer type of flour than the traditional cookies. They’re filling, and so they can be a great alternative to a pack of instant noodles.

In fact, there are a lot of other healthy alternatives out there. These are just some examples, but one can think of others. The key is to choose natural foods and stay away from those which contain synthetic ingredients.